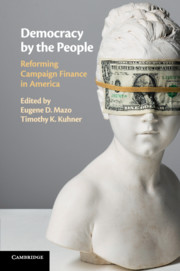 Essays on the United States prior to Trump:

Articles about campaign finance and corruption published in law journals: